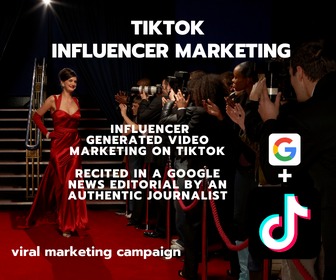 A short authentic marketing video produced and shared on by influencers with follower numbers between 500K and 1M on the TikTok social media platform. Additional news editorial via a Google News website, indexed in the Google News feed.

We’ve built a network with thousands of successful influencers over years. They collaborated with, and advertised for major brands such as Disney, Netflix, Loreal, Shein, and more.

This campaign’s success is largely attributed to our network and in-house expertise: Our team of social media marketing professionals and executives numerous influencers they work with. Our team’s involvement empowered thousands of brands and businesses and helped them reach over 900M+ in combined visibility.  This service is perfect for companies looking to reach viral marketing success thanks to TikTok promotion via notable influencers.

What is included in the influencer marketing package:

Your video shared by influencers with 500K to 1 Million followers depending on package. Our influencers will create your video, or share a video provided by you.

A news article will be written to appear in the Google Newsfeed, with your video embedded for additional visibility.

Famous influencers we are collaborating with have done campaigns with well-established artists such as Bruno Mars, Nelly and established names in Hollywood. Through this service we can promote songs, products, or your own social media accounts or brand. The accounts you will be promoted on have high engagement; if you are someone who has good content, but needs a helping hand with someone established pushing views and attention in your direction so you can get recognized by TikTok’s algorithm, then this service is for you. Our agency works with Fortune 500 Brands and has executed Influencer Marketing Campaigns on a global scale ensuring ROI and happy clients. With this campaign you will also get a  feature on Google News ( 1 X 700 word article), and sometimes as an extra bonus, we get influencers we work with,  who are verified on platforms including Facebook, Instagram, to give you a shoutout on their social media channel.

How It Works in 3 Easy Steps:

How many followers do the influencers have?

These campaigns revolve around macro and mid-tier influencers. The reach ranges from 500K-1M depending on how much visibility you may desire.

The truth is that TikTok, as a Chinese-owned tool, was designed to seduce Westerners (and the world) by making the viral sharing of content much easier than our own restrictive platforms like Twitter, Youtube, Instagram and Facebook. Why? Because the Western companies seek to earn advertising money, but TikTok seeks to expand the influence and reach of it’s owners – which is basically the Chinese government.

Our take is simple: If you want to support specific Western companies via your advertising budget – you known where to set up your pay per click campaigns. But since this is not a “paid advert” campaign but rather an influencer engagement: if you seek to exploit the opportunity that comes from the lax rules and exponentially higher reach influencers command over their content, the right now, TikTok influencers represent a gold mine.

Which influencers do you work with?

We work with a large number of influencers and have established connections in the U.S. Depending on which sector you’re in, we will create the right campaign for your audience.

We do not disclose the names of influencers, it is confidential so please do not ask.

Do you guarantee a certain amount of views?

We do not sell “views”. The service is specific: We’ll help you get promoted on highly visible TikTok accounts with specific follower numbers. But it’s up to the followers and the TikTok algorithm, as well as the quality of your video, that will play a role in how successful this service will be for you.

The metric we guarantee, is the total FOLLOWER NUMBERS of the influencer account/s where your video will be shared.

I don’t know how to make a TikTok video, can you make one for me?

You don’t need to worry about that! Our influencers will create the video for you, successfully promoting your service, brand, music or product

Do you run campaigns on any platform except for TikTok?

TikTok is the leading option for viral social marketing. However, message us and let us know which platform you are looking into, and we will let you know.

What do you promote?

How long will it take to get the video published?

Is this a viral marketing campaign?

The format of the campaign, being social media marketing to a large following, combined by a Google News broadcast executed by a real journalist, contain the most typical elements of a viral marketing campaign. We do not guarantee the number of shares and social footprint it will leave, however you do get to choose the specific follower levels – and we know that the Google Newsfeed attracts an additional 360M viewers per month.

Client testimonials - 98% of our clients return: 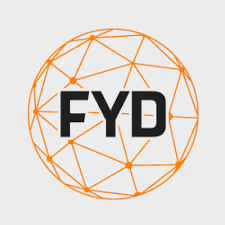 ManieS

Owner, health and wellness brand
Read More
Sitetrail went over and beyond expectations time and time again. They think quickly and smartly on their feet and use their initiative really well, which I appreciate. Thank you very much!